I am often saddened when a celebrity takes their life but when I heard Robin Williams may have committed suicide I cried.  If this famously funny man, who made millions of people laugh, couldn’t fight depression then what chance do any of us have?

Robin Williams was pretending to be an alien when I was around eight years old.  I didn’t understand the humor but his personality, his mannerisms, his impersonations were mesmerizing. Watching him was like going to the circus and watching a dozen different clowns inhabit the same body.  I will always remember him as the quirky alien in a stripped shirt, rainbow suspenders, and an extremely furry body.  But the most memorable thing about him was his smile and how it touched his eyes.

He was like static electricity, a live wire, on the comedy stage and had the most brilliant dirty humor.  Robin Williams was the first comedian I ever heard say the word penis.  He was a master at improv and some of my favorite moments were when he cracked himself up.

There were moments though when we were given a glimpse of the man behind the mask.

Orson: The report, Mork.
Mork: This week I discovered a terrible disease called loneliness.
Orson: Do many people on Earth suffer from this disease?
Mork: Oh yes sir, and how they suffer. One man I know suffers so much he has to take a medication called bourbon, even that doesn’t help very much because then he can hear paint dry.
Orson: Does bed rest help?
Mork: No because I’ve heard that sleeping alone is part of the problem. You see, Orson, loneliness is a disease of the spirit. People who have it think that no one cares about them.
Orson: Do you have any idea why?
Mork: Yes sir you can count on me. You see, when children are young, they’re told not to talk to strangers. When they go to school, they’re told not to talk to the person next to them. Finally when they’re very old, they’re told not to talk to themselves, who’s left?
Orson: Are you saying Earthlings make each other lonely?
Mork: No sir I’m saying just the opposite. They make themeslves lonely, they’re so busy looking out for number one that there’s not enough room for two.
Orson: It’s too bad everybody down there can’t get together and find a cure.
Mork: Here’s the paradox sir because if they did get together, they wouldn’t need one. Isn’t that zenlack?

I think what made him such a good actor was the level of empathy he must have had.  You could see it during certain scripted scenes where he is trying to convey a serious point.  There were moments in Good Will Hunting, Hook, and Mrs. Doubtfire.  His eyes lose the light and you see the sadness in them. 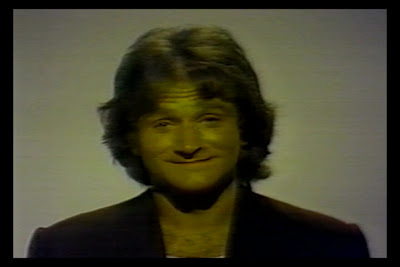 In 1978 he performed live at the Roxy and he had a few moments I will never forget.  They were moments I felt like he was being real and it was painful and sad.

The wine has done me in. You have poisoned me and I have gone too far into the land of strangeness. But since I’ve kind of lost you, come inside my mind and see what it’s like when a comedian eats the big one, don’t be afraid come on in.

And this moment, which you can watch towards the middle of the clip in the youtube video below, where he is impersonating an elderly man:

Robin Williams had 5,410,813 facebook fans, 729,000 fans on twitter, a beautiful family and lived in a gorgeous home atop one of the most beautiful bay areas in California. I drove by his house once and thought wow this would be an amazing place to live.

He had enough money to buy happiness and a billion people to confirm his brilliance. We all loved him.

Because he was bi-polar.

Because he suffered from depression.

Because depression is a disease and it isn’t logical.

Because depression doesn’t give a shit who you are and what you have.

Depression is a disease without a cure and if it isn’t managed it can kill you.  It isn’t about being sad, or not having friends, or needing attention.  It is about feeling alone in a world of people that love you because it blindfolds you and deafens you to the reality and logic around you.

I wished he could of held on…

RIP Robin Williams…go and build a new world where everything will be funny.

80 thoughts on “SPARK OF MADNESS”