I’ve never felt more alive than the day I decided to take the screen off and be myself, releasing stuck pieces of reality from the filter used as my defense and watching the withheld, eager remnants descend in the very first pour. Instead of pretending I was what everyone wanted me to be, it was time to be myself.

I left teaching, a career I dedicated myself to for 8 years, only to face the unknowns associated with entrepreneurship. I wanted to write about injustices I’d survived. I wanted to share my truth so the isolation I felt when hiding didn’t latch on to anyone else who might be living in a similar silence. And while those things were exactly what I wanted, they didn’t become a reality until I realized they were also the things I truly needed, and I needed to let go of everyone else’s expectations in order to get there. That, my friends, was terrifying. However, all of the wishing I could say what I really meant and act how I really felt became possible when I stopped worrying about the reactions of others more than I cared about my own.

Because what’s real to me is seeking answers to life’s most uncomfortable questions, knowing discomfort leads to growth (and growth leads to unmistakably glorious moments), and learning – constantly – how to be the best human I’m able to be.  To be real means to always check your intentions and actions and decide if they match up with your soul’s purpose now and five years from now. Whatever I do today I want the old Lindsay to look at and say, “Damn girl, you did good.”

When I am honest, open and constantly exploring, I am a better person, partner, and family member because I don’t feel as if I have to pretend to be anything for anyone. There’s no family filter, no façade in front of my spouse, I show them the worst and best of me and they’ve learned to accept it all, all because I put my faith in the fact that they loved me the way they claimed.

I’m not a faithful person in terms of organized religion. I can’t be certain what happens to my soul after it leaves my physical form, but I know the feeling I get when I make heart-centered choices is worth pursuing anyway, the internal warmth a cue I am honoring my own spirit and a call to keep moving toward what best serves me and the world.

It’s a scary concept to let go of the fear that protects us from disappointment, shame and guilt less likely to surface when we restrict our actions. If we just don’t try, there’s no way we can fail, right? This theory is learned at such a young age that by the time we’re adults we don’t even realize when we’ve stymied ourselves.  This is why, I believe, so many of us hear words like authenticity and become annoyed, puffing our chests because we don’t want to look in the mirror and face the hard truth that we water ourselves down so we don’t disappoint anyone…

We can pick apart every single action, we can analyze intent, and we can judge people unlike us for damn near anything. Or, we can choose to believe everyone is doing their best and trying just as hard as us. Though it might appear they aren’t, we can assume unseen hurdles have hindered their path.

My belief is that self-love can’t be successful when we only live life on the surface. We cannot love others when we challenge their every action, especially if we don’t first serve ourselves (and trust in our own movements), and we can’t serve ourselves if we aren’t – at the very root of our existence – doing the things that make us so uniquely crafted.

Being real means understanding that in order to live the life you’re destined for, you have to let go of the bullshit so many people will try to pin on you, to release should and could and embrace would.

What would you do if you could not fail?

What would life look like if you loved yourself more?

How would the world be impacted if you were your true self?

Being real – for me – began the day I reinvented my life and has become a daily choice. One worthy of dedicating time to, one that has only grown each relationship I am in, and one that I emphatically advocate for in every soul’s life. 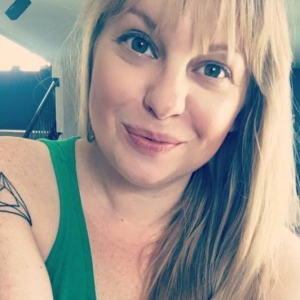 Lindsay Fischer is a trauma-tested author who writes about her own experiences to help others feel less alone. A former English teacher and dance coach, a domestic violence survivor, and – now – a seemingly infertile Myrtle, she refuses to be silent about the things that change our lives. For her, those issues are domestic violence and infertility.

Lindsay Fischer graduated from Missouri State University with a Bachelor of Science in secondary education, English. Life got messy when she fell in love with a man who would become her abuser, and it pulled her from the classroom. After three years of trauma therapy, she saw an opportunity to use her voice against injustices and shame-filled adversity, blogging under the pseudonym Sarafina Bianco since 2009. She revealed her real identity in 2015 when her memoir, The House on Sunset, was re-released.

Her new book, The Two Week Wait Challenge: A Sassy Girl’s Guide to Surviving the TWW, will be released August 1st, 2016.

She currently lives with her husband and three dogs in St. Louis, Missouri.