Anytime a group of people have to see each other every day, as they do in school or at work, there are bound to be a few bullies.  If we find ourselves in a position where we are being bullied we must formulate a way out of that position.  I know so many people who are living with bullies either A) because they don’t realize they are being bullied or B) because they feel stuck.

My guest, Michelle Poston Combs, recounts the workplace hostility that was a part of her life for many years.  It left her feeling hopeless and dead inside but her story has a happy ending. Thank you Michelle for sharing it. 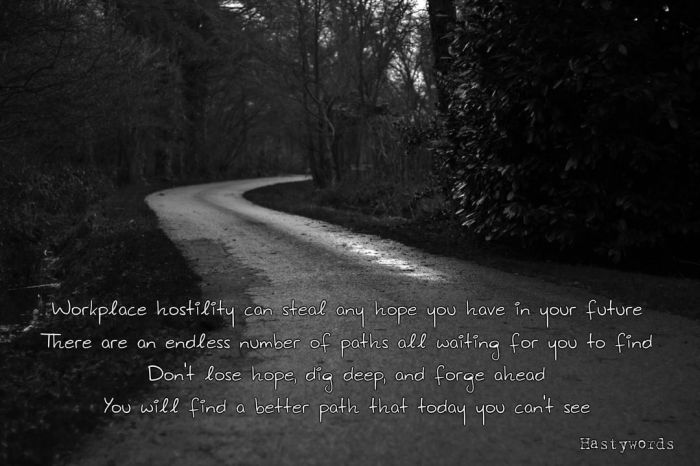 The answer that most people would give is none. We shouldn’t take a single second of workplace hostility.

I spent over 7 years at a job where I dealt with bullying and hostility on a daily basis. The hostile behavior came from two sources. Unfortunately, one source was the head of my department.

I’m a computer programmer. I’ve been working in IT for over 25 years. I’ve held positions from help desk to IT Director. I’ve always been valued and my efforts usually earned me nothing but praise.

Well, except for when they didn’t. But really, I mostly got praised.

Not at this job. I wasn’t valued in my job because I don’t have a penis. The other programmers in my group (the ones with penises) were referred to as ‘The Guns’. They also were fortunate enough to have their own names! They got called by their name every work day. They were asked how their projects were progressing. They were told what a good job they were doing. The guns got a lot of positive reinforcement.

Me? Mostly I was ignored. Every once in a while, the department head would pass my desk and give a loud and disappointed sigh. The only time he ever talked to me were those times he would call me into his office to ask me how a project was going. He wouldn’t even pretend to pay attention, then he would get to the reason I was there. It was so he could bitch about his personal life. He wouldn’t speak to me for weeks, but then he’d get mad at his wife and become Chatty Cathy and I’d end up hearing things that were quite frankly, none of my business.

He would sometimes insult me by saying my hair looked bad, or comments about my weight would be made. They wouldn’t be direct comments, just enough that I would know what he meant, but if it were repeated back….well….it may have been innocent. Or the comments would be passed off as a joke.

I regularly heard the following things:

Leave it up to a woman to mess things up.

This is a man’s job.

Every once in a while, when luck was shining on me, I would get to hear: Good morning, pretty little lady.

The abusive behavior didn’t stop there. Bullies were rewarded in my department. In fact, one of my peers physically threatened another co-worker. He got his own office. Because he was ‘difficult’ to deal with, so it was best that he had his own space.

This is the same guy who would tell the same tired stories about the times he made people cry at work. He bragged about it. In my 7 years there I have heard him scream and yell, slam drawers, punch walls and threaten to walk off the job. Throughout the company, users would call me and beg me to work on their projects so that they didn’t have to deal with him. Yet, he was catered to and I was treated like a light-weight who would be more valuable if I just fancied myself up a little bit.

Now, the first suggestion that anyone would give would be go to the HR department and complain.

HAHAHAHA. This would not have ended well for me. Sure, it’s what I should have done, but if I had actually done it, I would have had major backlash to deal with and I would have to decide if the permanent target I’d have painted on my back would go with the rest of my wardrobe.

I had bills to pay.

I needed this job.

I consoled myself with the fact that I had a short commute. I was also nearly always left alone. It didn’t matter if I worked or not. I was filling a chair.

I left that job 3 months ago.

One of the sweetest moments in all my time there, was telling my boss that I resigned. He asked me to stay. I said no. He wanted to make a counter offer. I told him that if he did and it was so much money that I couldn’t afford to turn it down, then I would be staying for the money only and is that really what he wanted? Then I said to just make it easier on both of us and don’t bother with a counter offer.

When he accepted that I wasn’t going to stay, he asked me what I could tell him that would make him a better boss.

I spent an hour telling him in great and satisfying detail what a horrible boss he was. I didn’t spare a single word. It felt good.

I’m waiting for the relief to set in. I was sure I would feel it. I was sure when I knew I would never have to see those people again that I would become light-hearted and happier.

That hasn’t happened yet. When you get bullied for years, it does change you. Leaving the situation doesn’t make those changes go away.

Of course I am happy to be away from a toxic situation, but just leaving didn’t fix it

Now, I have to repair the damage. It hardly seems fair, does it?

For anyone who has been in a prolonged hostile or bullying situation, the first thing to do, if you can, is to remove yourself from the situation. I wish I had left that job years ago.

Next, be kind to yourself if you don’t perk up right away after getting yourself out of a toxic situation. Getting over this takes time. Get counseling if you can.

I was driving to work earlier this week and it occurred to me that I didn’t have the hollow, sick feeling in my stomach that I’ve had for years. I don’t hate going to my new job. The people there are nice to me and my boss appreciates my efforts.

I think I’m going to accept their kindness.

Michelle Poston Combs is a blogger who lives in the Midwest with her husband and her youngest son. She is at the precipice of learning to live with an empty nest which she finds both terrifying and exhilarating.

Her blog, Rubber Shoes In Hell, is where she writes about topics ranging from awkward conversations with strangers to learning how to overcome being an adult child of a narcissist.

She programs computers to pay the bills and counters this soul sucking endeavor by writing her observations on life, menopause, anxiety and marriage

19 thoughts on “HOW MUCH WORKPLACE HOSTILITY SHOULD A PERSON TAKE?”