TO BE YOURSELF Written by Sandy Ramsey 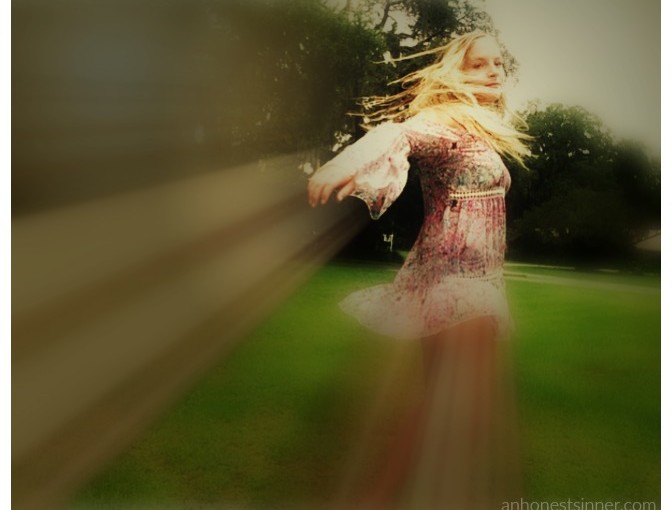 One of the most difficult ideas for me to grasp in this life has been the concept of how to be yourself. When you grow up without the advice to do such a thing or any idea of how to begin, you sometimes miss the metaphorical boat and become terribly lost, alone, and, in my case, addicted to anything that made me anyone but myself.

I was well into adulthood, and parenthood, before I got a semi-firm grasp on the idea and every day there is a new lesson. Call me a slow learner.

One of the most important things I have always wanted my daughter to know is how important is to be yourself. There is no more frightening thought to me than my children not having learned what they need from me to navigate what can be some very slippery slopes. It is my job to hand them the tools. How they choose to use them, well, that’s up to them.

My daughter is home schooled this, her eighth, grade year and she is determined to return to a brick and mortar school next year when she begins her high school journey. I think for the first time since the day she was born, I am more frightened of something than she is.

This child is the one who clung to me when I tried to drop her off at preschool. I begged, begged her dad to drop her off once because I just wanted one morning without the battle. He agreed and called me as he  left the school parking lot and explained to me that he would rather gnaw off his own arm than ever have to do that again. Needless to say, she became a preschool drop out.

Her father or I would have to lay with her at night until she fell asleep. I’m talking REM cycle sleep. I cannot tell you how many times I woke up in the middle of the night on the floor next to her toddler bed, her hand on my head and fingers twirled in my hair.

She begged me to home school her from the day she started kindergarten and I refused. As it turned out, she did just fine in the neighborhood public elementary school. Middle school was a different story and for several reasons, she finally won the home schooling battle.

She wants to have the high school experience. I am thrilled. I am proud. I am terrified.

I feared she would cling to me forever while secretly, and selfishly, hoped for it at the same time.

For one of her final assignments this semester she was required to write an essay about how she thinks she has changed over the years, a short thirteen of them that seemed to have passed at a speed so much faster than light and impossible to record.

When I read her words, I cried. The tears were a mix of sadness that all I have now are photographs and memories of the little girl who believed I hung the moon and would wear nothing unless it sparkled and absolute pride at the extraordinary young woman she has become, unique and honest, filled with compassion and joy, who no longer needs to wear the sparkle. She is the sparkle.

I want to share, with her permission, an excerpt of that essay:

I have changed drastically over the last 13 years. The people I have met and the things I have seen and heard have shaped who I am today. I was a shy little girl who would cling to my mother and sob when she would try to drop me off at daycare. I could never go to sleepovers because I was terrified to leave the house.

Just look at me now.

Today I look back at the things I would wear when I was eight and shudder. Eight year old me absolutely needed bright pink and blue walls in her bedroom, thirteen year old me is not a fan. I was fearful of everything –  the dark, ghosts, clowns, you name it. That lasted until I started watching television shows like Criminal Minds and Doctor Who. Now I’m not scared to walk down the hall at night.

I remember when I was nine I made a list of all the things I was going to have as an adult. I truly believed I was going to have a glass house covered in Christmas lights, an enormous chandelier, 3 kids, and 30 dogs and cats. Now I understand that I am way to clumsy for anything made of glass, 30 dogs is a little much, and I definitely don’t want kids.

I have changed a lot over the years and I will continue to change in the years to come. There are always going to be changes whether they are positive or negative. Understanding that there is nothing you can do to stop change is important, because without change we can’t move forward.  So, instead of fearing the future, I am excited to see what it holds.

I think she’s gonna be okay.

And she still thinks I hung the moon.

5 thoughts on “TO BE YOURSELF”