There are many things I love about Byron. I think he is the kind of REAL that changes lives. But I don’t want you to take my word it; I want you to discover him for yourself.

Here are a just a few of his stories. If you are like me though, you won’t stop with these posts.  Because his stories are real.  They will stick with you.  And  you will want to know more.

I AM A KILLER

YOU WILL NEVER SEE YOUR OWN FACE

Not only does Byron work hard on being the person he is, he inspires others during the  process. He inspires me.

We share so much of ourselves these days. Raw form mixed with carefully crafted persona to varying degrees. The presentation of the self, or of one’s endeavour, is a skill. It is a craft that can be practiced, trained, changed, upgraded.

A true self is neither a raw form void of external influence, nor the sum of influence void of the individual. The true self is essentially the union of several entities. It is perspective. It is attitude. It is circumstance. It is nature. It is planning. It is choice. It is culture. It is practice. And on and on and on…

Become who you want to be, slowly over time, with attention to detail. Without the lie of the quick fix. Without the snake oil. With the proper tools and materials and education.

As with any craft, there are things you can take on, and things you can leave behind. There is no perfect instrument. Only variations and versions. Extensions and evolutions.

Pay attention to the quality of your output and of your character. Own them and hone them. It’s not about rooting out the faults. Its about trying and failing and learning and growing and understanding and applying and focusing and mastering.

Master the crafting of your true self until you have made something beautiful.

What does being real mean to you?

To me, it’s fairly absurd to think I’m stuck the way I came into the world, without the possibility of evolution or upgrading. I say this from the point of view of somebody who suddenly stopped having a crossed eye after cosmetic surgery when I was 17, and battled Anorexia to grow a body I like, with muscles and fat on it.

It’s so much deeper than my body and face though. I’ve had to retrain my brain, practice and grow a quality character through the racism and misogyny and extreme violence I grew up around.

The real core of who I am is nothing like the sum of what I’ve created around that core. The real me is that whole me. That mix between what I am naturally, how I have been trained, and how I’ve taken the reins of my own life and become the person I want to be, slowly over time, through practice, brutal honesty, self-examination, and a willingness to become more of my ideal.

How do you think people see you when they only have an image to go by?

Well, some people cross the street to avoid me when they see me coming. They’re scared or intimidated by experiences they’ve had, I guess. And they associate me with those. I carry myself with confidence too. And I’m kinda big for a little guy.

A lot of people tell me that I’m attractive. I tend to think of that as less my physical image and more this magnetism I seem to have.

People are drawn to me. I like when I can make friends that way, but magnetism isn’t always a good thing. Sometimes the people drawn to me are dangerous people. Sometimes, they are misled by feelings they have about me based purely on how much they like the way I look, or the friendly vibe I give off. I guess I could take advantage of that a lot more than I do, but I don’t believe in doing that.

Generally, people just know I’ll be there for them. They seem to know I will listen to their stories and pay attention. Strangers will walk up to me on the street and tell me all this deep, dark stuff. I’ll care, and I’ll offer advice, or just an ear. I don’t know what gives that away. Eye contact, maybe?

What do you think people are most surprised to discover about you?

Nobody believes me when I say I used to be a pretty bad guy. Honestly, I was raised in an extremely abusive home, seeing or being the victim of violence on a daily basis. I lived in the projects, where the only rule is survival. I was homeless, and tried to scam people on a regular basis. I’ve been involved in crime, drug addiction, racism, misogyny, general bigotry, and all the things that come with being left to fend for yourself as a kid.

People say things like “I’ve only ever known you to be a pretty decent guy”. I’m proud of that, because I used to be a total fucking asshole. I’ve worked very hard to become a crime-free, drug-free, and well-intentioned person who wants good things for others. And I’m not just willing to help people, I’m good at it. 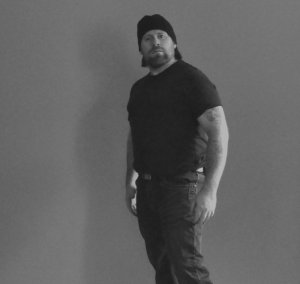 Byron Hamel is a writer, musician, and award-winning journalist living in Manitoba, Canada. He sings in the bands “Person” and “Ticklish Brother”, and has a series of dark poetry based on cheesy films called “Movie Poetry”. Visit moviepoetry.com and download it for FREE!

He also blogs at Trauma Dad where he talks about growing up hard and severely abused by a father figure who was convicted of infanticide, and is currently on death row. Left with a legacy of traumatic stress and an eating disorder, he is determined to be the best dad he can possibly be to his two girls. Follow his journey as he learns and loves and grows with them.

Byron is also a filmmaker, working on his first feature length documentary, which is about tough bikers who protect abused kids! Read about his current project titled: A BREAKING CYCLE

If you like the idea of the #BeReal campaign, and want to share your views on it, please link up with us. You can help make this a bigger, brighter movement than it already is.

All opinions welcome – it’s about being real, after all!

To help spread the message, read and share one another’s posts.

And remember – be YOU! #BeReal.