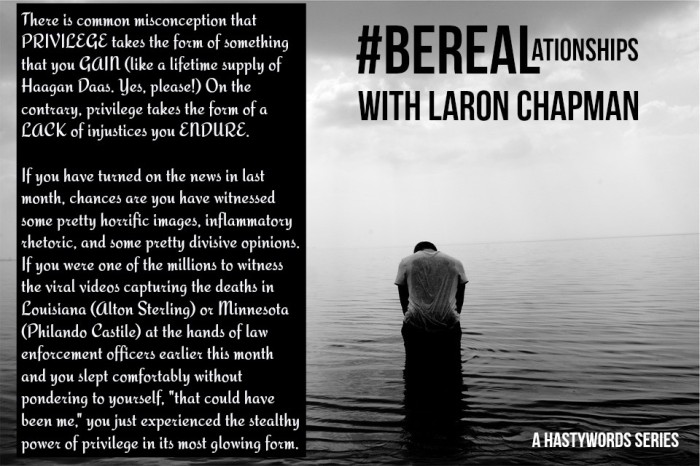 Humor me for a brief moment. Close your eyes (well, not literally, considering I need you to continue reading). Imagine you are minding your business, grocery shopping and you notice an over-zealous store clerk shadowing your every move, ensuring you have not “slipped something in your pocket.”

Perhaps, that was too specific. Let’s try again.

Imagine politely opening the door for a middle-aged (or elderly) Caucasian woman only to be met with visible fear or a firm clutch of their purse.

Still too specific. Third time is a charm.

Imagine being pressed to find positive images (e.g. film, music, news coverage, etc.) that represents the people, the culture, or the world you came from, being told that there is a difference between NIGGERS and BLACK PEOPLE, or being told you are WHITE or NON-THREATENING because of your college education, articulate manner of speaking, or your appreciation for Country/Rock music.

My name is Laron Chapman, and this is my reality.

There is common misconception that PRIVILEGE takes the form of something that you GAIN (like a lifetime supply of Haagan Daas. Yes, please!) On the contrary, privilege takes the form of a LACK of injustices you ENDURE.

If you have turned on the news in last month, chances are you have witnessed some pretty horrific images, inflammatory rhetoric, and some pretty divisive opinions. If you were one of the millions to witness the viral videos capturing the deaths in Louisiana (Alton Sterling) or Minnesota (Philando Castile) at the hands of law enforcement officers earlier this month and you slept comfortably without pondering to yourself, “that could have been me,” you just experienced the stealthy power of privilege in its most glowing form.

Now, to be fair, I cannot reasonably expect everyone to understand the daily nuances, prejudices, hate speech, racial profiling , and preconceived notions I experience (present tense).   I’m simply asking for people “to try.” Try and imagine the damaging affect a lifetime of internalizing the aforementioned experiences can have on an individual’s self-esteem, self-worth, and value.

Now, before you misquote, misunderstand, or mischaracterize me, understand that I believe the rioting, vandalism, anti-white, anti-cop rhetoric is despicable and abhorrent. The five law enforcement officers slain in Dallas during a BLM protest is as much a tragedy as the ones that inspired its existence. However, I also know how dangerous and morally irresponsible it is to judge and condemn an ENTIRE group by the acts of a FEW (with their own exclusive, insidious agendas).

Saying you are against police brutality does not mean you don’t value, respect, or need police officers (trust me, I can barely discard of a spider in my kitchen without assistance). By comparison, declaring that you support black lives does not mean that all other lives can kick rocks. It takes wisdom, experience, compassion, and an eagerness to learn to know (and see) the difference.

Following the events in Louisiana, Minnesota, and Dallas, I attended a BLM rally in my hometown of Oklahoma. I participated with a healthy amount of anxiety, apprehension, and uneasiness about what could transpire. However, I was fueled by a desire to create and be a part of change (beyond the comfort and anonymity of a message board). What proceeded was one of the most powerful, moving, inspiring, and enlightening experiences of my life. 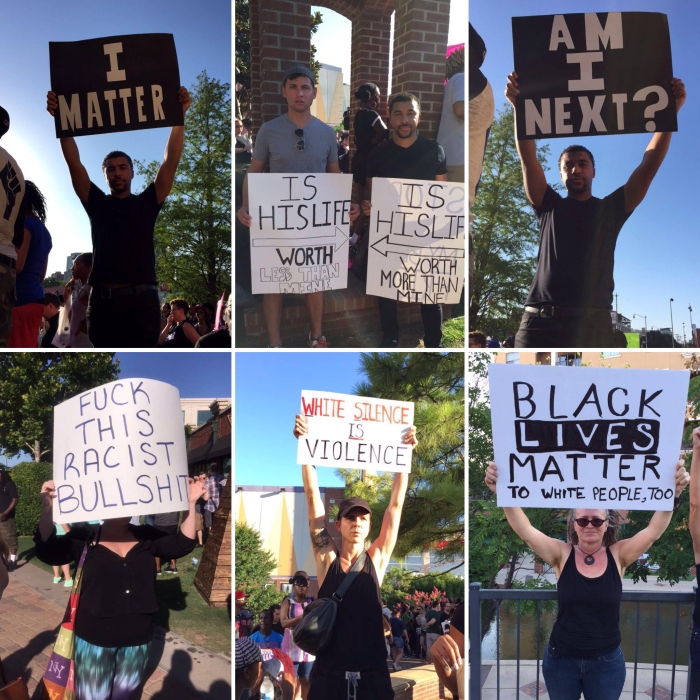 There was no in-citation of violence, no rioting, no hate speech, and no discernible dis-accord. Instead, I witnessed police officers shaking hands and exchanging hugs with minorities. I witnessed representatives of every race and gender holding hands and marching in solidarity. I witnessed activists, poets, and musicians voice their concerns with dignity, poise, grace, and respect for everyone involved. I witnessed a community put aside their differences and unify through a common humanity and hunger for peace and justice.

It was the kind of trans-formative experience that simply has no presence or air time in the media because they are too preoccupied (whether intentional or not) finding ways to divide us.

When an injustice happens to someone (black, white, LGBT, women, Muslim, Hispanic, disabled, police officer, etc.) it is ALL of our responsibility to band together and stand up for what is right.

This is not simply a race issue.

This a human issue. 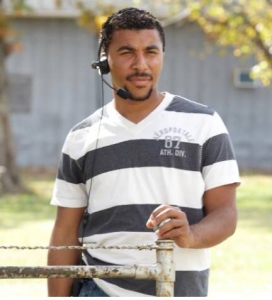 Laron Chapman is a passionate film and music enthusiast with a background in film and television production, journalism, and screenwriting. He graduated from The University of Oklahoma with a Bachelor’s Degree in Film and Media Studies. He works as a freelance Film/TV production assistant and screenwriter in Oklahoma City and has worked on projects ranging from the Oscar-nominated film “August: Osage County,” American Idol, Food Network, and Discovery Channel, among others.   laron.m.chapman@gmail.com

20 thoughts on “#BeREALationships – THE MEASURE OF A LIFE”