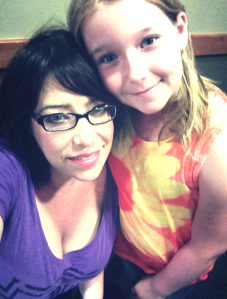 I took my daughter to summer camp yesterday for a week. I checked everything off the list as we packed and I didn’t break down every time I packed something in her suitcase like I did last year. She tried to pack the dog at one point; but after telling her she would have to take the dog out at night to do her business, in the dark woods alone, she thought better of it and left her with us. I got a weeks’ worth of stuff in one suitcase which is amazing when you figure I packed a twin size comforter. We loaded up and I didn’t break down and cry as much as I did last year.

I decided on the way to the camp I would read while she took a nap. I read Jessica B. Bell’s, The Best Medicine. The story is about a mom and her daughter and their fight for survival in a zombie-type apocalypse. Hooked from the very first bloody hand print; I read until we arrived at camp.  I love zombie stories and I wasn’t disappointed.  The short story was fast paced with great character development that grabbed my attention from the very beginning and didn’t let go until the very end.

We arrived at camp, unloaded all my daughter’s gear, and headed inside to register.  As we stood in line, for 40 minutes, I continued to read. My daughter made some joke about the dog being in the bag and I said for the benefit of those in line around us that the dog isn’t in the bag. “But I hope you gave your brother enough food to last until you unpack him.” I said seriously as she laughed.

“You know he gets claustrophobic.” I smiled as she made sure everyone knew she didn’t really have a brother.

I laughed then said, “But no, seriously, I need you to be careful.”

“I know mom.” she rolls her eyes

“If everyone else becomes a zombie I need you to NOT become a zombie.”

And then she looked at me incredulously and said, “Mom, if everyone else is a zombie I will be a zombie and it will be ok because we will all be zombies.”

“Well I prefer you NOT be a zombie.” And I went back to reading.

In the short story there are evacuation alarms going off and there is some chasing, some running, and some chaos. I don’t think I am spoiling the story here; or giving too much away, because what monster story is complete without sirens and mass panic? Then… real sirens went off!

The building’s fire alarm got pulled and I looked at HastyKid and said with wide horrified eyes, “Zombies”.

Her eyes got big and said, “Mom, shouldn’t we leave? There might be a fire.” Nobody in the line moved. We all stood there afraid to give up our spot in line.

“I don’t smell smoke and there is a door right here. Don’t panic and we will be fine.” I assured her but continued to explain due to her worried expression, “But yes normally you will exit the building in an orderly manner until they figure out what is going on. In this case, I think someone in line accidentally pulled the alarm. I don’t smell smoke and…well… the door is right here if we have to run from the zombies.” she laughed.

I was planning our escape just in case we were about to be consumed by a fiery inferno. To my right was a big wall of windows to the outdoors, so in my mind, the potential zombies would be coming through the building and I would grab a chair, smash the window, and pull my daughter to a narrow escape. Thanks Jessica B. Bell for invading my imagination.

A male counselor looked at us and said, “Fire alarm people let’s back track into the building of doom towards that door that is several yards away instead of any of the 3 doors right in front of us!” Ok he didn’t say that but he asked us to leave and I just stood. I wasn’t going to march further into a building when there was an unlocked door right next to me.  And neither was anyone else apparently.

“I promise if I smell smoke or I am at all worried for our safety I wouldn’t be standing here. There is an unlocked door literally within our reach.” I assured my daughter.  “The worst thing anyone can do in an emergency situation is panic, sometimes panic is good, like when monsters are about to eat you, but in many cases there is no need for it.”

Twenty seconds later a counselor said a little boy accidentally pulled the fire alarm and everything was fine, other than having to endure the loud siren for a bit. I continued to tease my daughter and she continued to deflect all my hilarious comedic attempts. Then came the nurses station.

“Mom are they going to give me a shot?”

“Well they have to vaccinate you against zombies”

“So, are you telling me, you would rather turn into a zombie than get a shot.”

“No honey, no shots”

She got checked in, we got her unpacked, we made her bed and she gave me a quick hug and ran off with some already new and fast friends to play. And Hasty Husband and I left. And I was ok, I didn’t break down and bawl like I did last year.

But last night I wasn’t ok. I missed her. I hate not talking to her before bedtime. These weeks are the only weeks I don’t get to say goodnight or sing her the Nighty Night song. Last night I broke down and cried. This is only the beginning of me having to let go to let her grow up and it hurts.

You can download the e-book, to purchase the story I was reading, for .99 here!