Helena is an Original Bunker Punk member.  She started a new blog in May and I really hope you go and follow and support her.

Being real is sometimes really hard.  Harder when you grow up never feeling good enough. We grow up believing that good enough is something other people have the power to decide.

We don’t have to be good enough for anyone but ourselves. 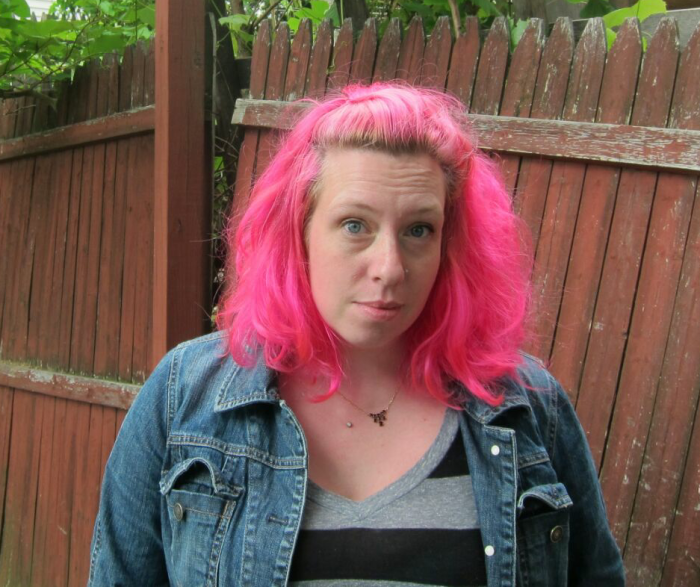 Shortly after my parents separated, after 30 years of marriage, after countless times of me wishing on a star that it would happen, my dad asked to talk.

I don’t remember us ever talking. I remember asking him if I could watch TV. Promising I won’t make a peep, silently wishing I didn’t have to cough or sneeze over Wolf Blitzer giving his updates on Desert Storm.

I remember asking him to come to my room to see my latest dance routine I’d been practicing for days. I’d somehow mastered the leaps and jumps, landing in silence.  He never came. I suppose he forgot. Or I wasn’t good enough.

I remember riding back from Florida,  in the bed of his charcoal Ford pickup truck. The thin brown and orange cushions in the black capped bed. The dark grey scratchy wool blanket, for when it got chilly, the closer we got to home, Western Massachusetts,  where it was winter, electronic spelling game to keep me company. I suppose it was so I could sleep most of the way, and not be in the cab with my parents, I wasn’t good enough.

I remember him taking me Christmas shopping. He needed my advise on choosing boots for a coworkers daughter. She was just my size. I coveted the boots I chose for her. Grey “suede”. I was so happy I was asked my opinion on them. They ended up being under the tree for ME. Under the tree I was told we’d not have. I didn’t
deserve it. I wasn’t good enough.

So to have him ask to talk to me was huge. I was terrified. I’d come to terms with the way I’d grown up. I’d accepted it, and was kind of grateful. It had helped mold me into who I was.

We’d taken a ride to the pharmacy.  Something I needed to do anyway. Somewhere that wasn’t too close,  but not too far away. Somewhere where time and distance wouldn’t be too much in the cab of his pickup truck. It was just enough.

We rode there in silence. Me hating the way he looked out the drivers side window for a bit too long. Remembering him telling me time and time again, that it was fine, he knew where the road went. Sometimes he’d hum. Tunes that only made sense in his head.

We parked,  and I went in. I wasn’t long, the script was ready. I almost wished it’d taken longer,  allowed me to procrastinate.  Just long enough not to upset my dad.

I got back in the truck to even more of an awkward silence. He finally spoke.  He addressed someone far away, out the windshield.  He admitted I wasn’t good enough.  I wasn’t worthy of his love.

Those words, that I knew were true for far too long, left me empty. Hollow. To hear them, to realize he was openly saying this to me. We were both raw.

I couldn’t say anything. I could barely breathe. Then he started crying. Saying he was sorry. It was almost inaudible through his tears. Tears that caused him to get enveloped in his sorrow. He was breaking down and I sat watching. Not feeling. I was already broken. This man had no effect on me. Until his sobbing caused his head to collapse and hit the steering wheel,  causing a startling beep. It reeled me back to reality. I saw the people look towards the random sound. I wished he saw too, was embarrassed, and hurt. I wanted him to feel the pain.

The hurt he caused me when I made a noise, and I got the look. The loom he said he learned from his dad. The look that made you wish you never existed.

My father has since changed in some ways. I’ve forgiven him. We’ve talked since. We’ve hugged. He’s listened. He’s helped. He’s become more of a dad to me.

We’ll never be close. I think we waited too long. Maybe we’re both just too broken and scarred from the past. Beyond fully healing.

But finally, with help, and understanding, I realize I am good enough. I am worthy. And though I use my feelings sparingly, and it’s scary as hell to let people in, I do. And it feels ok. I’ll get there. I’ll find happy. And trust. And love. And it’ll be enough.

I am a newly single mom of five amazing children. I am fluent in sarcasm and I like to play with yarn.